7th June 2014 - 1970s school friends reunited
Forty pupils who left Fakenham Grammar School between 1970 and 1972 were reacquainted with some of their teachers for an afternoon of reminiscing.
After commemorative photos were taken, everyone shared in a hog roast. Against a background of music from the 1970s, stories were swapped and
former classmates caught up on more than four decades which had passed since they left the school. A presentation was made to Vanessa Johnston (nee Stocking) for her work coordinating the reunion and the committee which had helped were also thanked. A spontaneous collection of £145 was made for the Times’ Let’s Fight for Fakenham appeal, which is helping victims of last month’s major fire in the town. 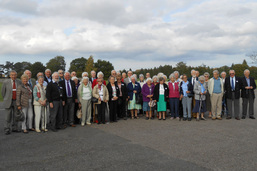 "Old School Boys and Girls" Get-together again
Some seventy years after they qualified to proceed to secondary education, fifty former pupils of Fakenham Secondary School (it became a Grammar School under the 1944 Education Act) met for a nostalgic get-together on the afternoon of 5th October 2013.  The group mainly included octogenarians, and even one nonagenarian. One former pupil said: 'The Second World War overshadowed our schooldays, but despite shortages of paper to write upon and teachers to instruct us, we still received a good education from which we all greatly benefited.'

The “Old Boys and Old Girls” assembled in the former school canteen (now referred to as the "Campus Café") and later took a walk around the school, which brought back many memories. The former classrooms now are filled with tables and computers rather than desks and chairs. Blackboards and chalk are replaced with white boards, and the former chemistry and biology laboratories no longer have the benches upon which pupils experimented and dissected animals. Another former pupil said: 'A new science block was built several years after our schooldays. The cookery and geography rooms on the first floor similarly have changed use and, sadly, the gymnasium and woodwork room were both destroyed by fire. Instead of the small library that we remembered, a larger library occupies a former classroom. The hall and main stairs remain the same, but the former Headmaster’s room is now a meeting room with comfortable chairs. Some of us remembered rather less comfortable occasions when Mr Eckersley had to inflict punishments'.

The official documents of the school have been placed in the Norfolk Archives, but some memorabilia were exhibited from Fakenham Museum of Gas and Local History, courtesy of the curator.  Objects which created much discussion included items of school uniform and magazines, as well as photographs of the buildings and various school teams of the 1940s.  Fakenham Community Archive Group were present and showed photographs from the collection.

The organiser, Dr E. M. Bridges, thanked everyone for making contact with contemporaries and making the get-together a success. Mr Jim Pawley, Site Manager, and Fakenham High School and College were thanked for facilitating access to the school buildings. The group also remembered friends who have died as well as former language teacher Miss Bowles, who had intended to come but who died suddenly last week.